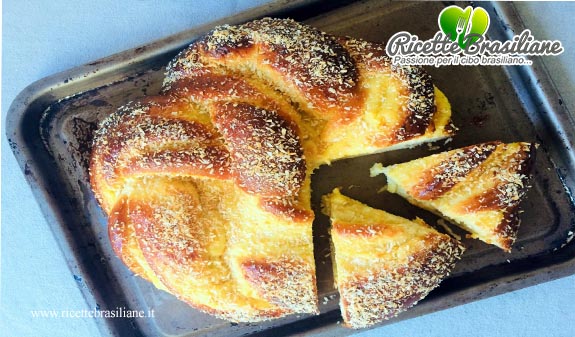 I bring you this sweet Rosca di Cocco recipe from Forno Pasticceria, taken from a highly recommended Brazilian site.

Coconut dough with cream: with a very light and soft dough, like a cloud.

Fill with a very smooth coconut cream. With the crust spread and shiny and then covered with grated coconut.

For the dough, the mixture of milk bread was used with a very light coconut cream to fill it.

I recommend that you prepare the cream first, because it must be completely cold to be used in the recipe and this takes some time - or prepare it the day before and keep it in the fridge.

This recipe can be found in the original Portuguese language on: comidacomafeto.com/rosca-coco

- PREPARATION OF THE CREAM -

Put the grated coconut, milk and vanilla in a saucepan and bring to the boil. Turn off the heat and set aside

In a bowl, put the egg yolk, sugar and wheat flour and mix everything until smooth - use a whisk

Pour the hot milk, a little at a time, over the beaten egg yolk and stirring - at the same time. Place this mixture in the pan and cook over low heat, stirring constantly, until it thickens and becomes a kind of mush. Turn off the heat, add the butter and mix well until amalgamated;

Transfer the cream to a bowl and cover with cling film so that the plastic touches the surface of the cream, so that it does not form a film. Set aside until completely cooled.

Transfer the dough to a clean, floured surface [this could be your work surface. Clean well, dry and sprinkle with all-purpose flour so the dough doesn't stick] and start kneading wholeheartedly for about 20 minutes. Roll out, squeeze and fold the dough on itself - or use the planetary mixer with dough hook

Put the dough in a bowl greased with oil, cover with a clean cloth and place in a quiet place [it can be in the oven, off, of course] and let it rise for 90 minutes

After the growth time, prick the surface of the dough with the back of your hand, just to remove the air and transfer the dough onto a floured surface. With the help of a rolling pin roll out the dough into a large rectangle and spread all the cream over it

Roll the dough into a cylinder. Once done, cut into 2 parts - lengthwise. You will now have 2 cylinders, so weave them together

Then wrap the braid to form the strand - IT'S SIMPLE, WATCH THE VIDEO

Let the donuts rise again, this time for 45-60 minutes and bake in a preheated oven at 180 degrees for 25 minutes.

- PREPARATION OF THE GLAZE COVERING -

To brown the grated coconut, place it in a small pan and cook over low heat. It's fast, be careful not to burn. Once the coconut is toasted, immediately remove it from the pan so that it does not burn.

In a small bowl, add the butter or margarine and syrup and mix well until smooth. Brush this mixture on the bread as soon as you take it out of the oven: the dough will melt and create a shine on the surface of the bread - and the taste is amazing! Then sprinkle the grated coconut. ON TIME: Sometimes I make a little more of this 'butter' and use it to spread it on bread, it's very tasty.