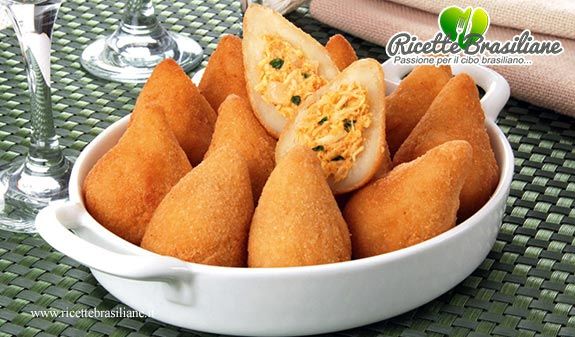 No more images found for this recipe!

Coxinha recipe in Italian Chicken Croquettes is a typical Brazilian aperitif, coxinha is a kind of large pear-shaped croquette, richly stuffed with chicken meat, mixed with potatoes and herbs, wrapped in a batter, then breaded and finally fried and served hot.

The coxinha is reminiscent of your arancini but the filling and preparation are completely different because it was originally created to imitate the golden chicken legs.

A Brazilian story says that a child son of a general liked to eat the chicken leg, only in a period it was difficult to find only that part so the cook to make him eat the other pieces of the polo shirt had invented these croquettes in the shape of a guard.

And the child will eat it, so it became a typical and popular dish in Brazil.

We are also on:

In a saucepan put the chicken legs or the breast, cover with the broth and cook on a moderate flame for about 15 minutes or until the meat is cooked

In the meantime, slice the onion and garlic thinly, wash the tomatoes and cut them into small cubes

Remove the saucepan from the heat, filter the broth and keep it aside. Cut the chicken into small pieces

In a pan, brown the onion and garlic finely chopped with a little oil. When they start to brown add the chicken and tomatoes, add the parsley, season with salt and remove from the heat. Let it cool down

Measure and pour the broth kept aside in the saucepan, add the same amount of milk, then the butter and put on the fire over low heat. When it is about to boil, pour the flour in one shot and stir firmly, continuing to mix until the mixture hardens and detaches from the edges of the saucepan

Remove from the heat and transfer it immediately to the clean surface.

Let cool for about 1 hour

In the meantime, chop the chicken mixture thinly.

Pick up the batter and make small balls as large as a ping-pong ball and working them with your hands, spread them out to make room for the filling

Pass each coxinha in the beaten egg, then in the breadcrumbs, making sure that the breading is uniform. Repeat the operation to increase the breading thickness

Fry in plenty of oil, drain on paper towels and serve