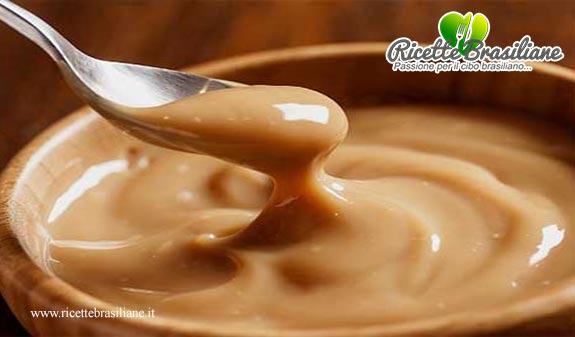 No more images found for this recipe!

Dolce de Latte is a milk-based dessert, typical of Brazilian cuisine but also of South American, Spain and Portugal.

The milk cake in Portuguese "doce de leite" and in Spanish "dulce de leche", is practically a cream based on milk and sugar that is obtained by cooking these two ingredients until they are caramelized. In this way, a dessert is obtained with a flavor very similar to that of classic toffee candies.

It is said that this dessert was created by a mistake of a maid, while she was preparing the lechada, he forgot milk and sugar on the fire, on his return, instead of the drink he found a soft and sweet cream, which was formed due to the prolonged cooking of the ingredients. The dessert, therefore born from a mistake, was appreciated and soon became famous throughout the country and soon also outside.

The milk cake is very simple to prepare, you just need a little patience, as its preparation requires almost two hours of cooking.

Once ready, just let it cool and use it to finish the preparation of your favorite desserts, but it is also excellent served as a spoon dessert or spread on rusks.

Closed in an airtight glass jar, it can be stored for a few days in the refrigerator, it can acquire a harder consistency, but you can easily soften it in a water bath or in the microwave.

Other recipes with Chinese food there find it here

Pour the milk into a thick-bottomed pan, heat it over high heat for 1 minute.

Add the sugar to the pan where you put the milk, mix with a whisk and melt the sugar over medium heat.

Cut a vanilla pod, scrape the seeds and add the seeds and pod to the milk, then add the honey and baking soda, then mix and bring to a boil over high heat.

Be careful to mix when it comes to the boil and lower the heat, then continue cooking the milk cake for about 1 hour and a half, you will see that as the color of the preparation changes, it will change from white to brown, until it becomes brown .

When it has reached a creamy consistency you can turn off the heat, consider that the milk cake will continue to harden even during the cooling phase.

Remove the vanilla pod and pour the cream into a jar, let it cool and then place it in the refrigerator to cool. If it gets too hard when it cools, you can soften it in the microwave or in a bain marie.