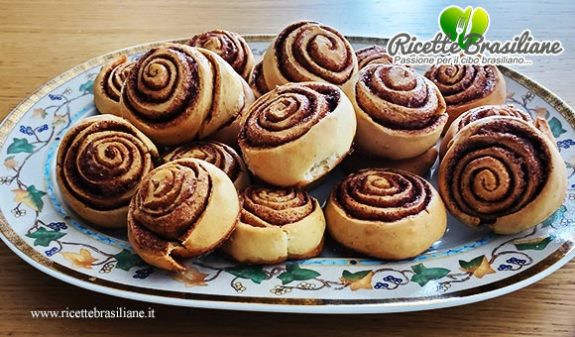 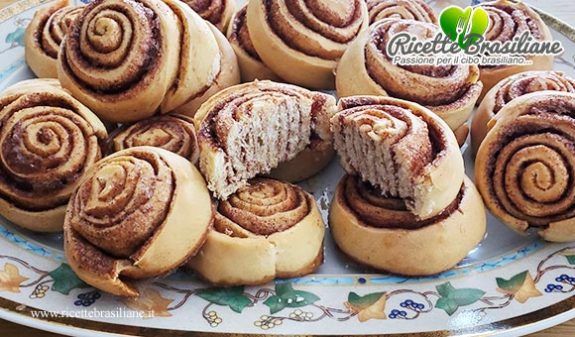 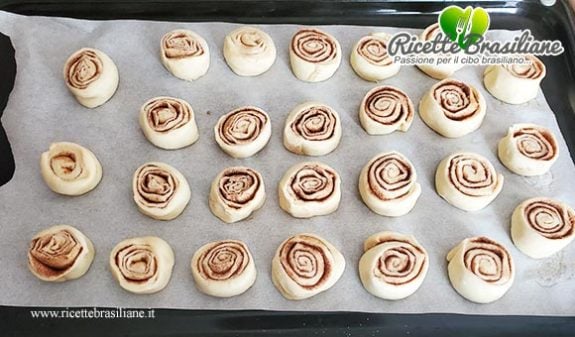 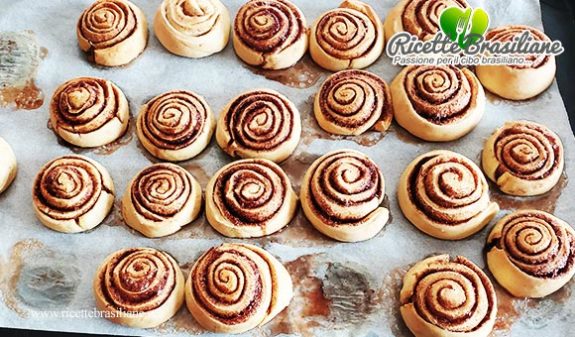 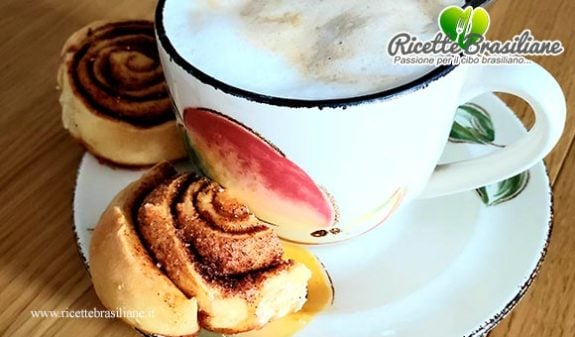 Traditional cinnamon rolls (kanelbulle) - brioche-like roll of pasta with an intense flavor and aroma of cinnamon, which as soon as you put it on the table they disappear by magic.

There are recipes that are so emblematic and that they bring such success that we don't even translate the name.

Yup! We are talking about cinnamon rolls i Cinnamon Rolls (kanelbulle). I'm an unconditional fan of cinnamon and leavened dough.

I studied the recipe some time ago and I don't remember the chef who shared it, only that he was Brazilian. I made some changes in my own way.

Cinnamon Rolls (kanelbulle) is a sweet born in Sweden in the 1920s, popular as a breakfast or dessert cake in northern Europe and America. In Sweden it is particularly popular and is often eaten in fika, the traditional coffee break with dessert

If you like cinnamon desserts and don't have much time and want an easy dessert to make with stale cream or baguettes you can try the Rabanadas Brazilian.

In a bowl mix all Czech ingredients and set aside.

In another bowl mix all the liquid ingredients and as soon as the melted butter cools add that too.

Now add the liquid and the dry ingredients, with a spoon, mix until everything is well mixed.

Transfer to the work surface and knead by hand until a smooth and homogeneous sphere is obtained. (if necessary add a pinch of flour to facilitate processing.

The dough will be ready when you have no residue on your hand.

In a bowl grease and place the dough inside, cover with plastic wrap and let it rise for at least 30 minutes.

In a bowl add the sugar and ground cinnamon, mix well and keep it aside.

Take the leavened dough and deflate it on a lightly floured pastry board with the help of a rolling pin. You get a rectangle.

At this point you will have to proceed to roll the dough. Start by gently lifting the bottom flap along the longest side, in this way you will help to detach it from the pastry board. Then proceed to roll a little at a time and being careful to roll tightly and without crushing the dough. Once the roll is obtained you will have to shape it with your hands, therefore hold one end with your hand and with the other press lightly towards the end you are blocking, to give a homogeneous shape.

With a sharp blade, divide the roll in half, divide one of the halves still in half and from each subdivision you will have to obtain 3 disks of the same size (about 3-4 cm). Continue in the same way for the other piece. You can shape them slightly with your hands to round the shape.

Grease a rectangular baking tray and add the baking paper. Place the rolls in the pan all in the same direction, spacing them about 1 cm apart. Once you have arranged all the pieces, gently press them with your fingers to make the shape of each roll homogeneous.

Finally cover with cling film and leave to rise for another 30 minutes. After the time the swivels will be doubled, then move on to cooking. Cinnamon rolls bake in a preheated oven, in static mode, at 180 ° for about 30 minutes. Once cooked, let them cool completely

You can prepare the dough of the cinnamon rolls in advance: just reduce the amount of yeast and keep the dough in the refrigerator for 8-12 hours; the next day it will be sufficient to resume the dough and let it acclimatize before continuing as per recipe.

Once cooked, the cinnamon rolls are kept at room temperature (or in the refrigerator), for a maximum of 1-2 days: but in this case it would be advisable not to glaze them in advance, since this will become a shiny syrup that will soften the dough very much.

THE HISTORY OF THE CINNAMONS BEGINS IN SWEDEN

When was the first cinnamon swirl cooked? It is thought that the Kanelbullar - swivel or cinnamon focaccia in Swedish - was born in Sweden. Cinnamon came from Sri Lanka over 2000 years ago and the ancient Romans were responsible for spreading the spice, having used it to accentuate the aromas of incense and wine.

In the mid-1700s, Northern European bakers began making super-rich leavened doughs with butter. The French molded them into buns, followed by the Dutch frying in oil. During this period, the British invented the Chelsea Bun, a currant sandwich; while the Germans developed the Schnecken, a rolled bun with sugar and black currant. These sandwiches laid the foundation for the Swedes to add cinnamon creating the very first rolls or swivels.

There Specialty of the week

Small and tasty cheese breads prepare the original Brazilian pão de queljo and enjoy them for a snack or at the end ...