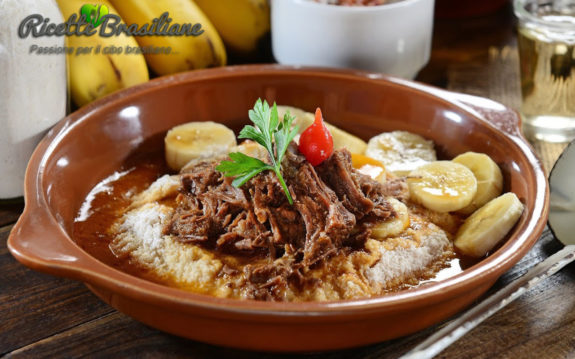 Barreado is the most traditional dish in the state of Paraná. Its origin dates back to an açorian ritual of over 300 years, brought to Brazil by the Portuguese who occupied the coast of Paranà in the eighteenth century.
One of the strongest characteristics of this dish is that if heated it does not lose its flavor or characteristics.

Traditionally, this recipe is made in a heavy clay pot. Veins cooked at a high temperature for about 20 hours.
This typical Brazilian food consists of one or more types of meats, such as duck, walnut or beef shoulder, seasoned with garlic, onion, pork loin, black pepper, bay leaf, cumin and cooked until they are completely frayed. It is served with cassava flour, rice and banana.

Mix the first 9 ingredients and set it aside.

Take a pressure cooker, cover the entire surface with bacon and cover with (Reale or Copertina or Beef breast), on top of it put a layer of spices prepared previously.

Layer the Rump of Beef with a little spice. Finally a layer of beef shoulder and on top of it what is left of the spices. Pour in the oil and put the water until all the meat is covered

Close the pan and cook on low heat for 1 hour after the start of boiling.

Do not open the breather, wait for the pressure to come out naturally. After opening the lid, with the help of a spoon mash the meat so as to fray it.

I recommend you eat it with cassava flour and banana.